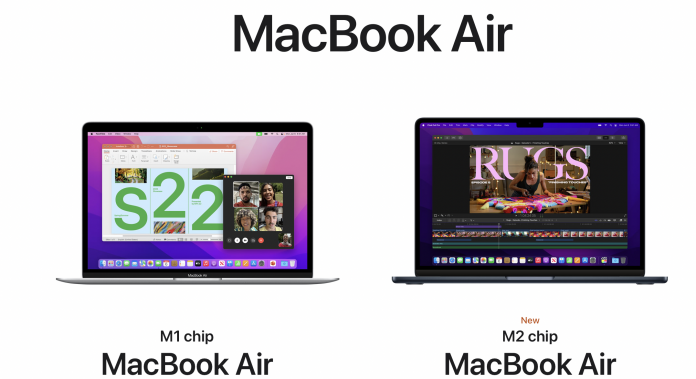 Since the release of its proprietary M-series processors, Apple has been busy taking full advantage of its potential. The brand-new MacBook Air M2 (2022) is the newest iteration of Apple’s laptop series. It continues to promise elegant visual design, excellent functionality, and adequate performance.

In terms of design, the new MacBook seems to mimic the earlier and more expensive MacBook Pro 14-inch and 16-inch. Although it still has that iconic wedge design, the Air M2 (2022) appears somewhat boxier. It still looks sleek, while being more portable than the bulkier MacBook Pro models. Although still not the thinnest laptop on the market, the MacBook M2 version is very portable. It weighs just around 1.25kg, compared to the MacBook Pro 14-inch at 1.6kg. The new MacBook Air is still conservative in terms of color selections. You still get Silver and Space Grey, but there are also the new Midnight and Starlight options, which has a subtle golden color. Midnight is essentially very dark blue, which may show off fingerprints more than Starlight. There is a couple of USB 4/Thunderbolt 3 ports on one side, while on the other side, you will find a 3.5mm headphone.

The M2 processor used by the new MacBook Air is the basic model of the generation, so it’s still slower than the M1 Pro and M1 Max. There are two main hardware configurations of the MacBook Air M2 (2022). The base model is sold for $1,999 with an octa-core CPU, octa-core GPU, 8GB of RAM, 256GB SSD, and a 16-core neural engine. For a few hundred more, you can get a more capable version with 10-core GPU and 512GB SSD. There are options for 16GB RAM, 24GB RAM, or 2TB SSD, which is necessary if you are a serious multitasker who opens plenty of resource-intensive apps.

Also Read: Which MacBook should you buy in 2022?

How to Play Among Us On Mac

MacBook Showing a Black Screen Here’s How to fix