Much to Intel’s dismay, Apple has developed a new processor, the M1. It is essentially an ARM SoC with CPU and GPU integrated in one chip. This means, Macs with M1 processor can natively run any iOS app. However, for un-ported x86 applications, they must be emulated and this results in degraded performance.  The M1 is an octa-core SoC with four high-performance Firestorm cores clocked at 3.2GHz and four efficient Icestorm cores at 2.1GHz. The latter is useful for keeping energy utilisation low while running less demanding applications. When maximum computing performance is needed, eight cores will run simultaneously. The M1 processor is also currently used in latest models of Mac Mini, MacBook Pro and MacBook Air. 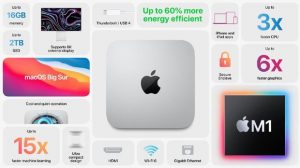 This means that you get roughly similar performance with the latest Mac Mini. Because it’s a SoC with embedded GPU and unified memory for efficient utilisation of RAM, you can guarantee to get highly efficient performance. As a one-chip solution, you won’t get bottleneck in performance, because all the computing parts have been fully optimised. For moderately demanding tasks, the M1 SoC still requires relatively low power. It may not be a problem for a plugged-in Mini, but a huge advantage if you have a MacBook. The GPU performance of M1 is dramatically higher than the Iris UHD Graphics 630, which makes the Mac Mini more capable of supporting image editing, video rendering and more demanding gaming. Based on real-life benchmarks, it appears that the GPU module of M1 is similar in performance with the Nvidia GTX 1050. 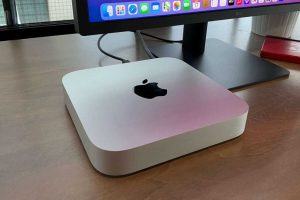 The base model of Mini has 8GB of RAM and 256GB of solid-state storage. It should be adequate for any casual usage, such as watching movies at 4k resolution on your large screen display. With that amount of RAM, there should be no problem to multitask with the Mac Mini. As an example, you can open a dozen of tabs in Safari with one tab running YouTube video at 4k resolution. You shouldn’t find any degradation in performance. With multi-core benchmark test in Geekbench 5.3, the Mini scores 7,683 points. The MacBook Pro and MacBook Air with M1 processor also has similar roughly scores. However, the Mac Mini may perform slightly better in the long-term due to its better cooling solution. During peak load sessions, the Mac Mini may be able to squeeze out more performance out of its M1 processor. With the earlier Geekbench 5, the Mac Mini scores 6,005 points, significantly higher than the Intel Core i5 8365U that gains only 3,265 points. If you want to transcode a short video clip from 4k to 1080p, it should take less than ten minutes to complete. If you prefer to game with the Mac Mini, the Civilization VI turns in a playable 31fps at 1080p resolution. Be aware that the Mac Mini isn’t a 4k gaming platform and you will get bad stutters if you dial up the resolution to 4k.