The best thing is the machine can be upgraded if needed in many ways. You can upgrade the RAM, storage drive without any issue. Obviously, you will have to pay for these upgrades.

As compared to the previous models, the MacBook Pro M1 looks much improved and contains all the necessary features.

Let’s talk about its features and how it is different from the previous Apple models. Let’s review the M1 MacBook Pro and check out what is stored for you in the box:

In terms of design and looks, the MacBook Pro M1 looks like its ancestors, almost three pounds of the aluminium slab. The model lacks a touchscreen, and it has macOS Big Sur as the operating system.

Overall, the design and looks are almost like the previous Macs, and we noticed that Apple has trimmed down the bezels around the display. Furthermore, the colour options are limited too, and you have to choose from shiny silver or space grey. And this will be a disappointment for many Mac users.

As for the connectivity, the ports and connectivity options are also limited. Apple’s MacBook Pro M1 comes with only two Thunderbolt/USB 4 ports and a headphone jack. However, the Intel-based variant features four Thunderbolt ports, which is much more expensive than the initial version.

Probably this is the most prominent feature of Apple’s M1 MacBook Pro and a much-needed one. The M1 battery backup is the most reliable and much longer than the previous Mac versions. While testing the unit, we used it continuously with Wi-Fi and 150 nits of brightness, and the machine lasted for a whopping 16 hours.

This battery backup was surprising for us. It was much longer than the Intel-based variant of MacBook 2020 and the popular MacBook Air M1.

Similarly, the Windows competition was not even near to these numbers, and the difference was huge. Bottom line: the M1 MacBook Pro offers you the best performance when it comes to battery life.

The MacBook Pro M1 allows you to play demanding and intense games without lagging and getting slow down. We run and play mainstream games during testing such as Tomb Raider, Prince of Persia, and Civilizations at high frame rates and high settings. The results were awesome, and it delivered 38 fps, much higher than the previous models and others.

Keep in mind that we tested the M1 on the highest settings, and if you want to enhance the performance more, just dial down the settings and enjoy the smoother performance. 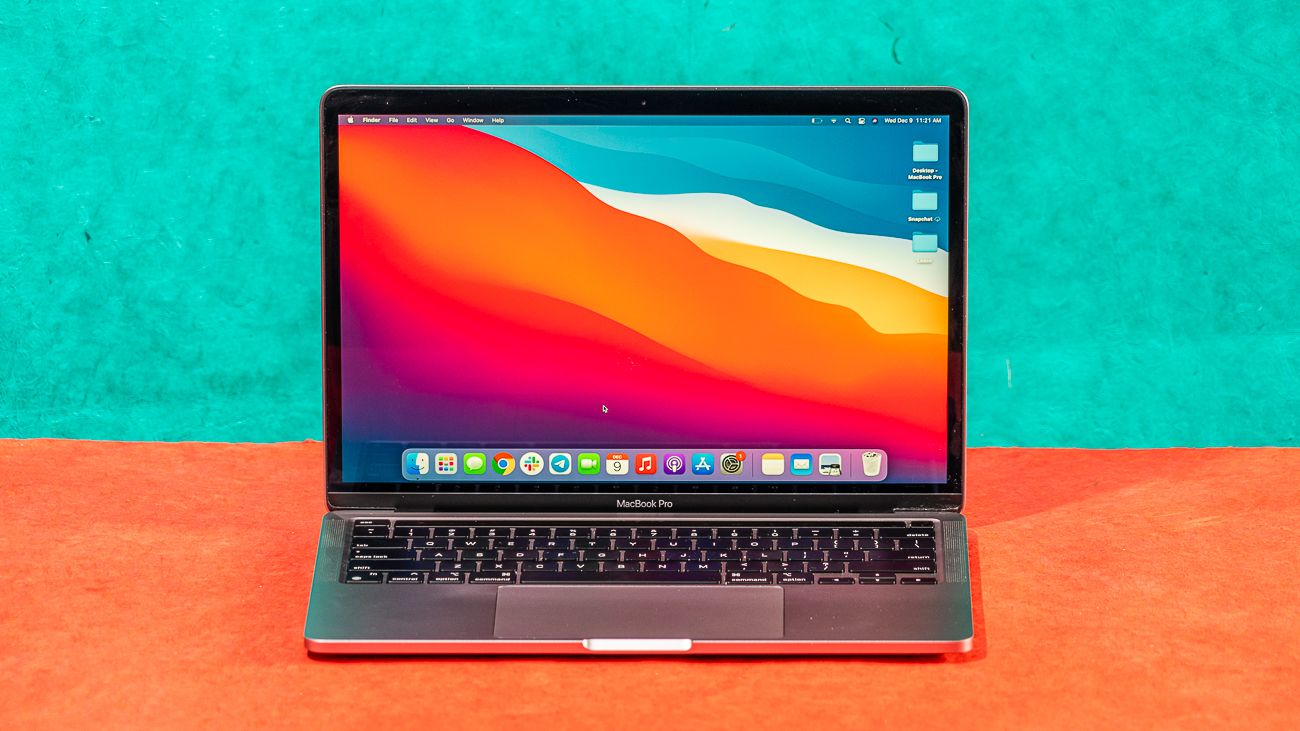 This is another department in which M1 MacBook Pro shines. The machine features Magic Keyboard, and it is more comfortable, soft, and typing on this thing becomes a treat. The layout is a bit changed compared to the old butterfly one. Typing and using the Magic Keyboard gives you a unique pillowy soft feel that was not present in previous models.

The touchpad of the M1 MacBook Pro is improved as well. It has become more spacious and responsive than before. We noticed that scrolling, pinching to zoom, and using trackpad gestures were much smoother and simple. Swiping up with the claw and three fingers, or going reverse, all were seamless and quick.

Overall, you can use all gestures and shortcuts comfortably, and yes, these are handy.

The MacBook Pro M1 features a Retina Display and delivers a crisp and vibrant picture. In this model, Apple has trimmed down the bezels a bit to make your surfing and viewing experience more detailed and immersive.

The MacBook Pro M1’s picture quality surpassed the previous Apple models and Dell’s XPS series during our tests. To be precise, it delivered 439 nits of brightness which is much higher than the MacBook Air and other popular machines.

The M1 features stereo speakers that give you accurate sounds and an excellent listening experience, just like previous models of Mac. However, we didn’t notice any major improvement when comparing it with earlier Mac machines, but the overall sound quality was excellent even on the high-pitched music.

If you are about to use MacBook M1 for the first time, then you will be impressed by the performance of these built-in speakers.

In previous Mac models, we have seen a 720p webcam, but here is the thing. This new and the latest MacBook M1 can handle HD display really well. Webcam’s overall quality is much better and improved in M1. Besides, we noticed a significant reduction in noise, perhaps due to image signal processing from the M1 chip.

We tested MacBook Pro M1 with the last Mac and used their webcams for quite some time. The differences between the picture qualities and final outputs were clear. We also tested M1 MacBook Pro in dim light conditions; the picture was up to the standards and much brighter. Lastly, there was no splotchy mess like you will see in previous models.

The MacBook Pro M1 is one of the best Apple releases of all time. This compact and sleek 13-inch laptop has everything that you can ask for. It delivers blazingly fast performance with outstanding battery life, and picture quality is amazing as well. What else do you need for comfortable usage? Totally worth the price.

Have any questions regarding the topic M1 MacBook Pro: Review? Feel Free to comment below.

Also Read: M1 MacBook vs iMac: Which One Should you buy?